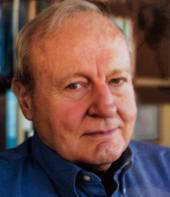 We are very sad to announce the passing of John Clubbe, former president of the IABS and the Byron Society of America for many years. John Clubbe died on February 24, just a few days after his 84th birthday.

He was Professor Emeritus at the University of Kentucky and taught at Duke University for many years. Anyone who attended an IABS conference experienced his warmth, intelligence, and wide-ranging lectures on inter-disciplinary subjects. With Joan Blythe, who helped him run the IABS with great aplomb, he shared his erudition in conferences all over the world, including Tokyo, Salzburg, Beirut, and Tbilisi, to name only a few. He gave the Leslie Marchand lecture on Byron and Beethoven, the subject of his last and widely reviewed book with Norton, which has sold over 3500 copies. Many will wish to share their memories of this kind and supportive scholar, who brought scholars into the study of Romanticism and Lord Byron. A fuller notice of his career will follow in due course.